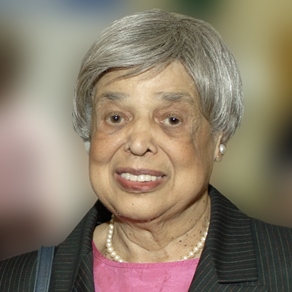 Fannie E. Floyd embodied the mission of the YWCA in eliminating racism and empowering women. She was instrumental in the integration of the colored (as it was known then) and white YWCAs, and in 1971 she served on the committee for the first YWCA forum on eliminating racism. She served on the board of directors for the YWCA for several years and up until her death in September 2008 at the age of 84, she was a strong advocate for the YWCA and its programs.

Fannie was involved in a multitude of Princeton area civic, social, charitable, and religions organizations for more than 50 years. Initially she was involved in open housing and equal education issues in the community, and later served on the board of Planned Parenthood, was a Cub Scout den mother, a Community House surrogate parent, and an active member of Churchwomen United.

Her most recent involvements included the NAACP Legal Defense and Education Fund, the McCarter Theatre Associates Board, Princeton Nursery School, the Princeton Community Democratic Organization, and the Witherspoon/Jackson Neighborhood Association.

Fannie was a dedicated member of the Witherspoon Street Presbyterian Church as an elder, a deacon, and a member of numerous committees over the years.

In 2008 Fannie and her husband Jim were honored for their lifelong commitment to the local community by Princeton philanthropists William H. and Judith Scheide. The Scheides created an endowment in the Floyds’ name to help the University Medical Center at Princeton provide healthcare to the uninsured and underinsured.

Fannie, born in Princeton, attended the Witherspoon Street School for the Colored and Princeton High School. She earned her bachelor’s degree in English from Virginia State University. When she returned to Princeton, she began her career at Educational Testing Service as a proofreader in the test production and development department. She worked at ETS for more than 20 years.

Fannie’s heart and conscience guided her to help others and speak up for social justice, even when it was unpopular to do so. She always spoke her mind in a gentle way and dialogued with others on issues of racial and social justice with grace and patience. S Her simple motto was one we can all embrace: “I do things because I see a need.